A VR educational exhibit in the theme of an escape room set in Ancient Egypt.

The Brief
For the final project, students can continue their projects from the first personal project, in which case students will have to resolve their design decisions from semester 1 or to engage a new design problem.
The subject material for this project is self-determined but the module will embrace; visual and verbal preparation of design proposals, research and investigation; assessment of goals, audience, content and design requirements; prototype development and evaluation.
The Solution
During the development of my AR project in the first semester, the university had bought an HTC Vive VR headset. At the time it would have been rather strange to suddenly switch my project to a VR adaptation of my idea at the time; a museum companion. So I decided to wait for my final project where I had an extended amount of time to develop my project into something amazing. I worked again the with head curator of The Great North Museum for this project thanks to the trust gained through showing the development of my AR project.
Speaking to the curator gave me the opportunity to get a focus group in to test out the general development of my project regularly and to see if I was still going in the right direction; a strategy that I learnt through my time working and playtesting with Ubisoft.
I created the whole project in around a month, or if you want to be specific, 361 hours as noted in my SteamVR log. The development of this project was incredibly exciting as it was something that I had never tackled before. Using the program Unity, I started to develop my project incredibly quickly as rapid prototyping is something that I love to practice and seeing the development go by so quickly gave me great hope for the project.
The final product was a VR education escape room themed around Ancient Egypt to be used as an interactive exhibit alongside the Ancient Egyptian section of The Great North Museum here in Newcastle.
The Plan
At the start of this project, as this was something that I had never attempted before I needed to plan this out and had to have a clear concept on what I wanted from the first part of development.
I recorded each major section of development through the project, this meant that I can go back to old footage from the beginning of the development and review the major changes I have made throughout the project. I originally planned out a series of interactions for this project by creating a series of levels that users will be able to play through in a group or by themselves.
VR is an extremely solo experience to use in general, a solution that I found to this was to use a TV or external monitor to display the person's perspective who is using the VR headset.
If you would like to see the playlist of the development it is accessed here and embedded below:
https://www.youtube.com/playlist?list=PL_UXLq17xqIkmIy8DJGX6B8dr7bNuPcLT
Concepts
The original concept of the project was to have users walk around the desert to then rebuild the museum by finding exhibits and then it slowly rebuilds the museum the user will be attending. As this was extremely ambitious I decided to simplify it slightly but still maintaining the educational idea of the concept.
But instead of being so heavy handed with information it would show the exhibits in the location they would be in history which is where I would be getting information from the curator and local historians from The Great North Museum.
The escape room idea derived from thinking of potential puzzles that could feature in certain tombs in my "desert" idea; where users would have to perform tasks to get an exhibit to then rebuild the museum.
A problem with this was that the actual gameplay would take such an extensive amount of time that it would impact the user experience as it would have downtime between gameplay which would impact the moment to moment gameplay that I would be after to create the memorable experience I was aiming for.

New challenges… again
Just like my AR project, I was faced with such an extensive list of challenges that I would be faced with such as general game design, level design, interaction design for the game, user experience and many more related to actually using Unity in 3D design.
A large challenge that I came across early was that when using Unity, especially for something specialist like VR, it requires a large amount of scripting and other interactions.
Design Development
You can follow my development in the link mentioned prior and here but for some more details I will explain: https://www.youtube.com/playlist?list=PL_UXLq17xqIkmIy8DJGX6B8dr7bNuPcLT
Bow starting (The sausage bow - Top Left) - Creating the script and general interaction of the bow that I plan to use for puzzles.
Improving the bow (Haptic, power and targets - Top Right) - Using a ballon spawner developed by Valve, I spent a considerable period of time testing out the potential power and potential variables for the bow, such as the haptic feedback from pulling the bowstring. As the level design and puzzle developed, I wanted to have my arrows fired eventually stick into the walls and targets I developed.
Planning out the level design in 3D (Bottom Left) - Working in 3D is difficult especially to create a level that facilitates every potential user. Through an extensive amount of user testing, I got some amazing feedback and response to this and ended up with a well-designed level that the average user can respond to.
Final bow level design (Bottom Right) - I'm really happy with my level and everything included when showing the level off at our degree show which had received great feedback. 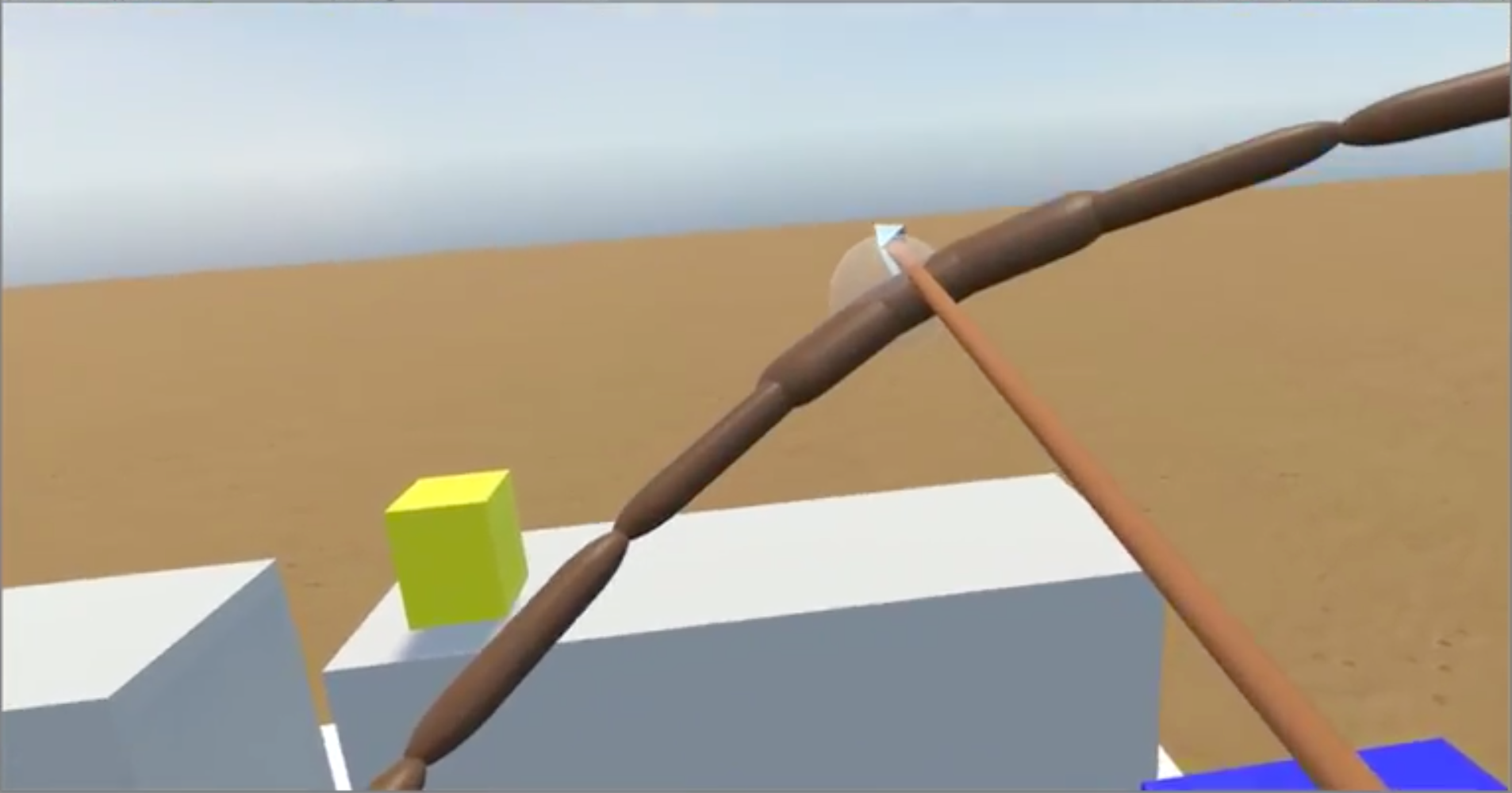 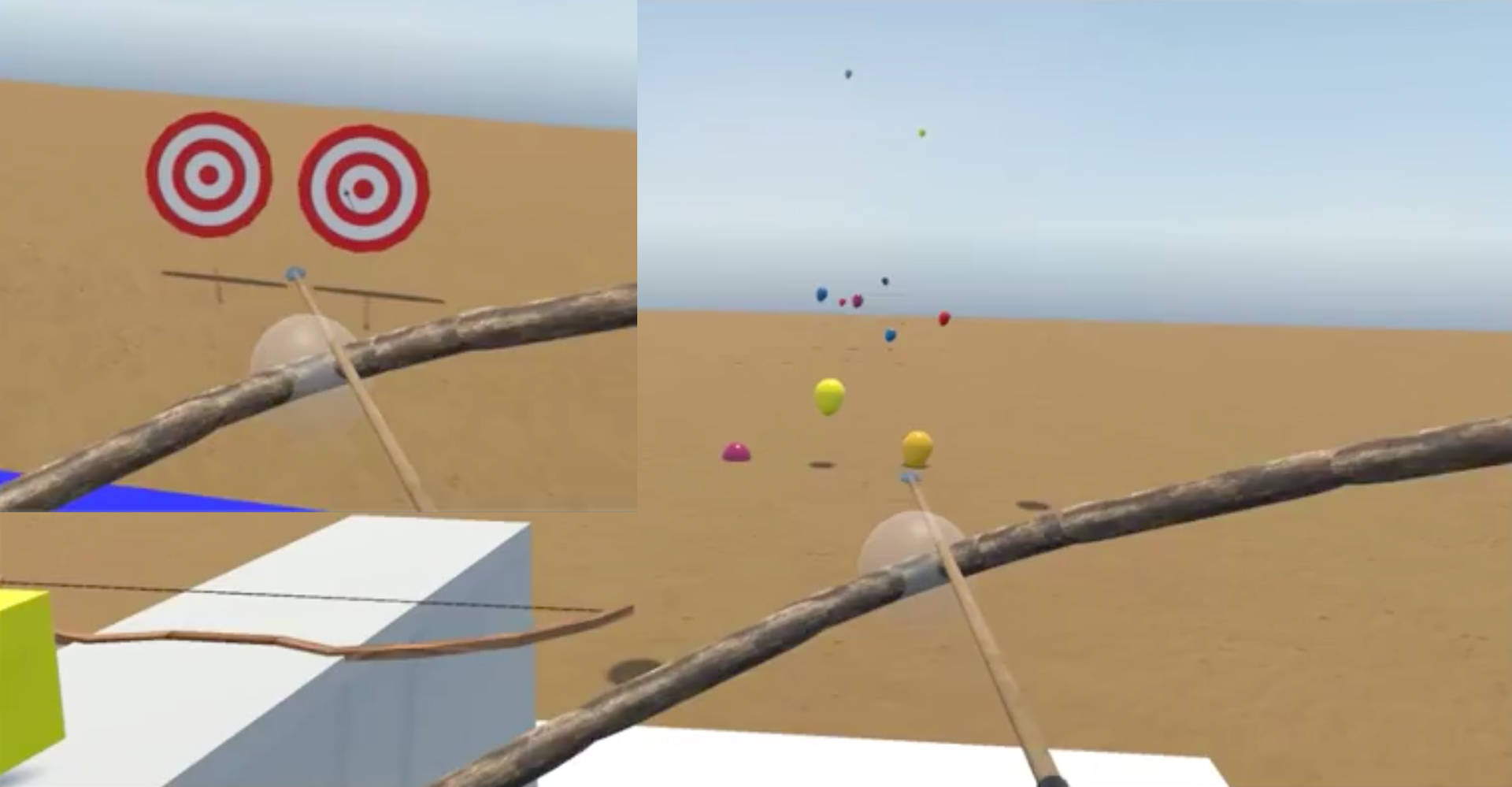 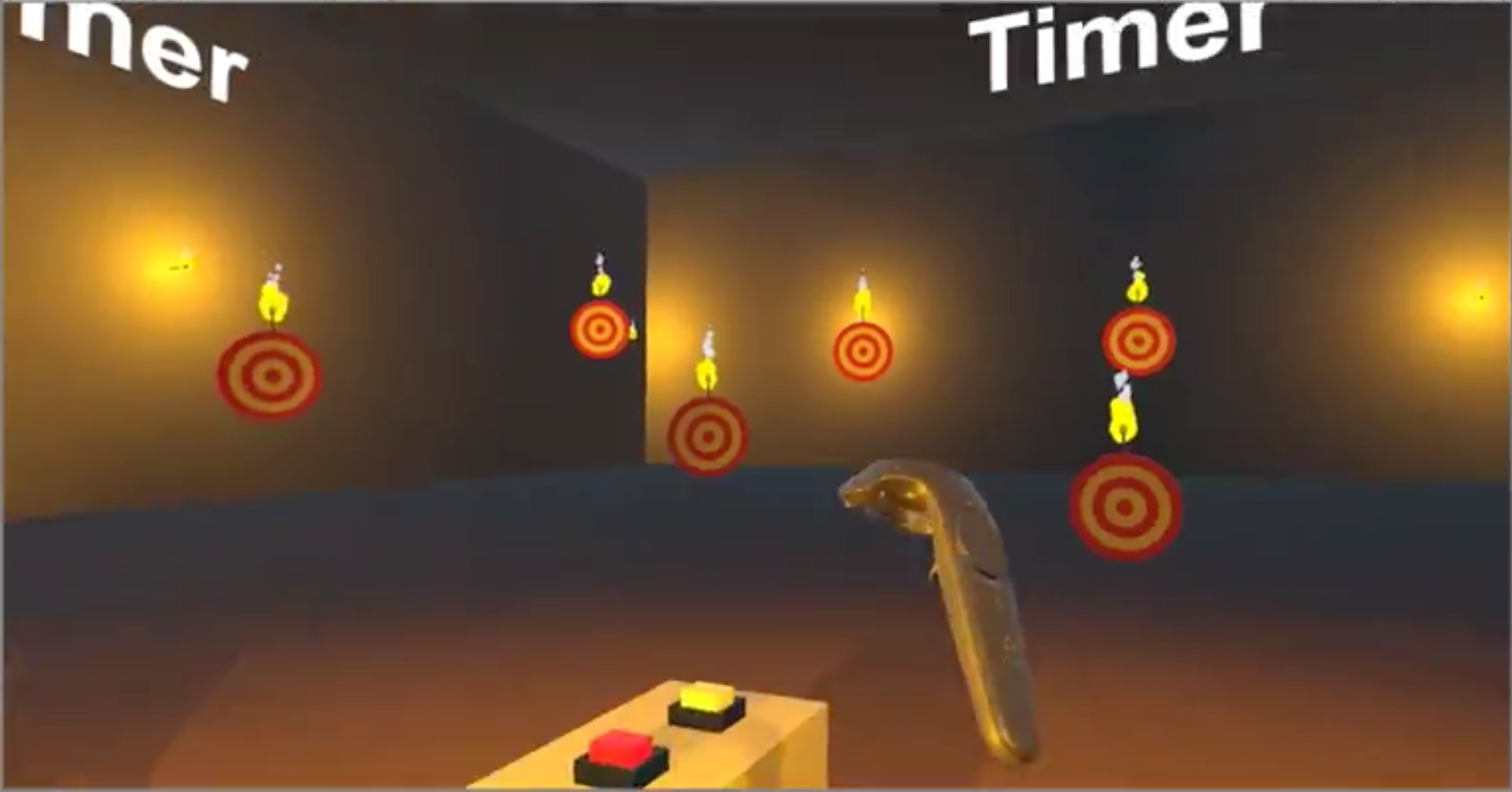 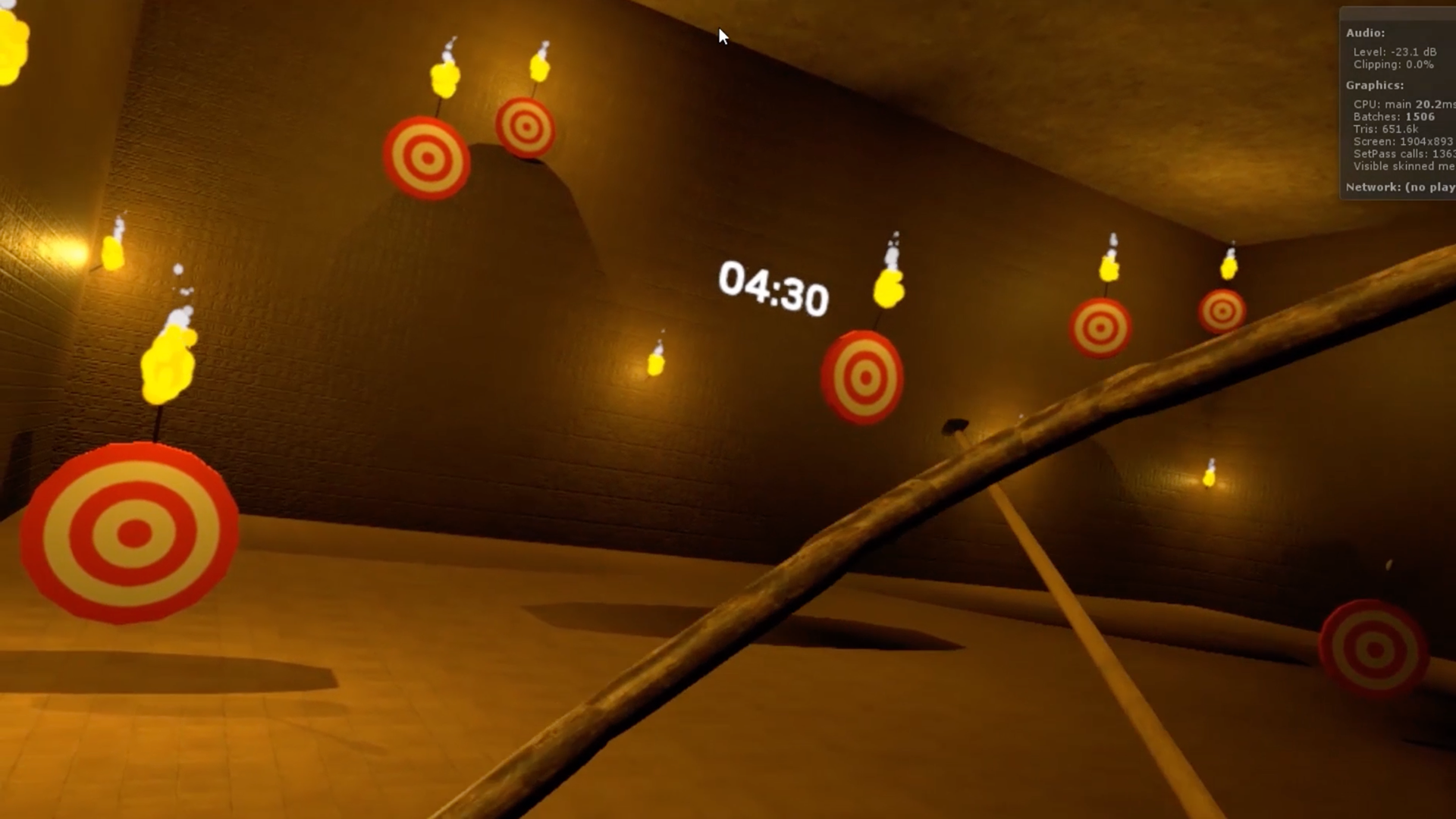 User Testing
User testing in a project like this is incredibly important, I will be utilising the testing to perfect the general user experience in my experience and gameplay.
One incident that came from this project was showing the project to another student; Jordan Hamilton. A few minutes before I showed Jordan my idea and project, he had just minutes before this caused himself some rather serious damage to his finger using a scalpel. When having him test out my VR project he had completely forgotten that he was in a large amount of pain and had unfortunately bled all over the controller and headset; obviously not very sanitary. I take it as a compliment to my immersive gameplay!
Unfortunately, I wasn't allowed to take photos during the user focus group sessions due to having to sign consent forms and other problems related to having to do with the university and the ethics related.

Design problems
A significant problem that arose from this project was that I had to create an immersive and realistic environment that would still be able to facilitate gameplay. I investigated immersion and spoke to several VR developers that have published games and from various very well documented locations about what they think make VR as immersive as possible.
To name a few major features that are highly documented are: Immersive environments, the general interactions of the game, having a convincing soundtrack and having convincing and interesting gameplay.
I plan to solve these problems through thorough user testing, developing a soundtrack from my experience in music production and immersive environments through my meetings with the curator.
Final designs
Whiteboard level (Top Left) - The "Whiteboard" level, designed simply for improved user experience. A challenge designed to be completed as a team.
Bow and arrow level (Top Right) - The "Bow" level, designed as a solo challenge but still weights against the user's skills and interactions.
Final puzzle level (Bottom Left) - The final "Puzzle" level is designed to be completed as a team where the user and the group they are with have to be vigilant of their surroundings.
Interaction Tutorial level (Bottom Right) - The tutorials I created for first-time users that have not used my project before, creating simple tutorials has helped significantly with the general user experience.

The final advertisement for the project.
↑Back to Top